Pirates to play for state title 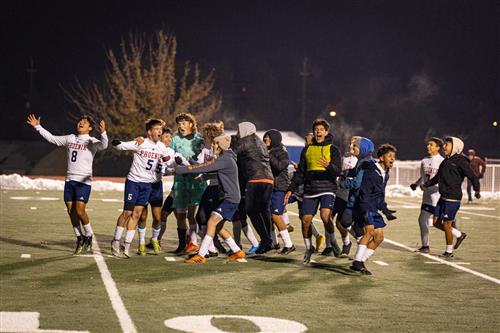 4A boys soccer final: what to know

The Phoenix High School boys soccer team continued its Cinderella run through the Class 4A playoff bracket Wednesday night with a 2-1 penalty kick win (4-3) over Skyline rival Henley in the state semifinals.

Here’s the lowdown on what comes next, how to support the Pirates on the final leg of their incredible postseason journey, and an already planned Sunday celebration:

WHAT: Class 4A state championship game.

TICKETS: $12 for adults, $6 for child ages 5 through high school senior. Purchase online here or on site.

ROOTER BUS: It's happening! The bus will depart Phoenix High School at approximately 9 a.m. and pull back into the parking lot by about 11 p.m. To book a seat, please contact athletics director Dave Ehrhardt at dave.ehrhardt@phoenix.k12.or.us.

WATCH PARTY: Can't go to the game? That's OK. Come watch it on the giant projector screen in the Phoenix High commons for free. We'll start letting people in at 3 p.m.

POSTGAME CELEBRATION: Win or lose, the Pirates’ march to the championship game is worth a special celebration, so that’s what we’re going to do. The Welcome Home parade will begin in front of the PTS district office (401 W. 4th St., Phoenix) Sunday at 4 p.m. The tentative plan is for the team to ride a firetruck two blocks to Phoenix High School, where a special assembly to honor the team will begin at approximately 4:15 p.m. We'll also be honoring Kyla Potratz, who won the 4A cross country state championship last week.